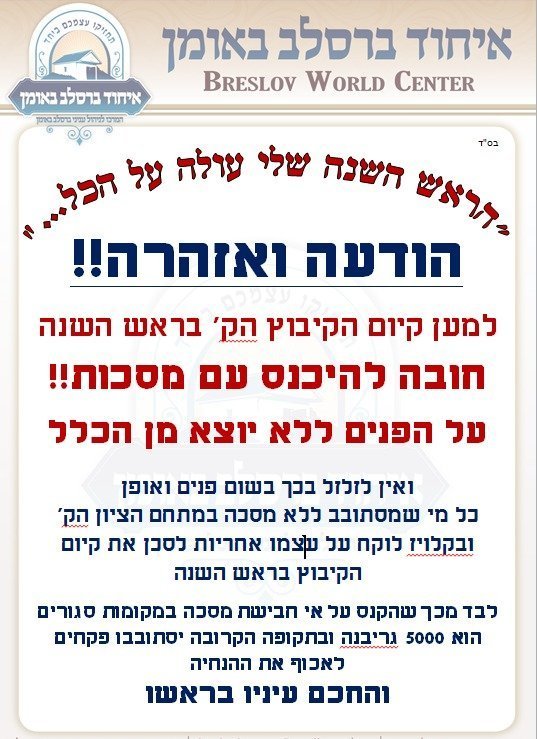 According to various sources in Ukraine, officials on behalf of the Mayor of Uman are trying to prove to the Ukrainian government that the Jews in Uman are not following the current health guidelines and therefore the kibbutz in Uman should not be approved for this coming Rosh Hashanah. Early Thursday morning an emergency announcement was put out by the Ichud Breslov in Uman that everyone should wear masks after learning that the Mayor of Uman was sending a team of photographers to find Jews who are not wearing them. Everyone wore masks and the team left without getting any pictures to prove their cause.

It is incumbent upon everyone who is in Uman and who will be traveling to Uman to follow all the current rules in Ukraine – social distancing and wearing a mask in the areas of the Tziyon and Kloyz. These rules are not to be treated lightly and anybody who is not following them is putting the Rosh Hashanah kibbutz at risk.

On Monday there are supposed to be critical talks between Israel and Ukraine regarding Uman Rosh Hashanah 2020.

PM Netanyahu: A plan should be worked out to allow charter flights to Uman

Update from Head of Corona Operations in Uman regarding the kibbutz