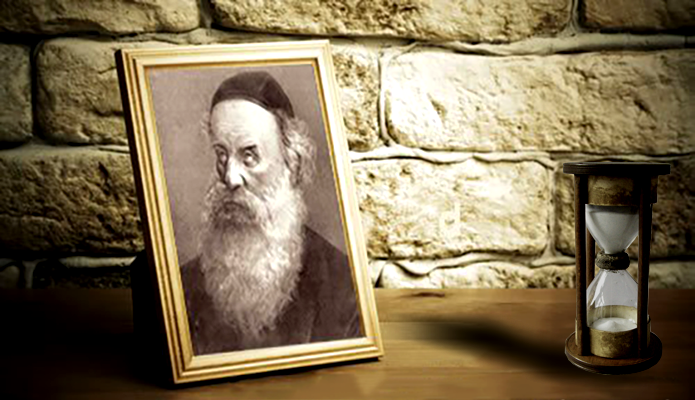 Tonight and tomorrow, the 24th of Teves, is the yortzeit of the Baal HaTanya. Here we will present the story of the historic meeting between Rabbeinu z”l and the Baal Hatanya z”l. The sources for these stories are from Breslov and Chabad seforim.

In the year 1810, the Baal HaTanya made a great trip throughout Russia to raise money for the people of the villages who were expelled by the tsar’s decree and thrown into the streets. There was also another reason for this journey – a visit to the town of Tulchin, the residence of Rabbi Baruch of Medzibuz in those days, to try to settle the dispute that arose between them.

On the way to Rabbi Baruch, the Baal HaTanya paid a visit to Rebbe Nachman of Breslav in the nearby town of Breslov. This was before Rebbe Nachman moved from there to Uman in the month of Iyar that year.

As the Baal Hatanya approached Breslov, Rebbi Nachman went out of the city to meet him, accompanied by many of his men and with great honor, and said to his men: “Give honor to the Prince of Thousands!”

The Baal Hatanya then came to the house of Rabbeinu and Rebbi Nachman turned to the Gvir Moshe Chinkes and said to him: “Give charity to a true Talmid Chochom!” He placed a gold coin (Rendel) on the table for the Baal HaTanya. Rebbi Nachman addressed him in bewilderment: “This is a gift for a true Talmid Chochom?!” So he put another gold coin and when he noticed that Rebbi Nachman was still puzzled, he added and placed another coin, but the perplexity did not go away and he added more coins until he gave ten gold coins. Then Rebbi Nachman grabbed the coins with his hand and gave them to the Baal HaTanya.

Then Rebe Nachman asked the Baal HaTanya if it is true that he has 80,000 Chassidim?

The Baal HaTanya replied that this would not be a novelty in his eyes because he also has many teachers within his followers, and each teacher has many disciples, and each student gives to charity for the Rebbe, and in this way, he is considered his follower. The charity that each student gives protects them from becoming a misnaged against the Rebbe. In this way, it is possible that he has 80,000 Chassidim.

Some say that between the things, Rabbi Nachman hinted to the Admor, that when the day comes, their descendants will marry each other. His remarks took place many years later (in the summer of 1767), when the grandson of the old Rebbe – Rabbi Aharon of Crimenchug, the son of Rebbetzin Freida, the daughter of the Rebbe, married (in a second marriage) Rebbetzin Chaya, the youngest daughter of Rabbi Nachman of Breslav.

Rebbe Nachman then hinted to the Rebbe that one day their descendants will marry each other. This came true a few years later when the grandson of the Baal HaTanya, Rav Aharon of Kremenchug, the son of Rebbetzin Freida who was the daughter of the Rav married Chaya, the youngest daughter of Rebbe Nachman.

The members of the Breslov community then accompanied him until he left the city, and the two Tzaddikim rode together in one wagon. When talking about the frictions with R. Baruch of Medzibuz, Rebbi Nachman remarked: “From Peterburg (St. Petersburg) you are already finished and saved but from Peter Baruch (Uncle Baruch) you are not (the machlokes will continue basically).

One of the traditions tells us that for some reason the Baal HaTanya did not agree to stay at Rebbi Nachman’s house, but rather in the wagon and Rabbeinu said that the Rebbe must have wanted to talk to the owner of the wagon about something ancient and holy.

This was not the first meeting of these two Tzaddikim however – a little more than ten years before the above story, Rebbe Nachman visited the house of the Baal HaTanya in Liozno, a visit related to certain letters from Rav Avraham of Kalisk to Rebbe Nachman. Rebbi Nachman had spent the first months of 1798 in Eretz Yisrael. While he was in Tiveria, he met several times with Rav Avraham of Kalisk and he promised him that when he would return to Ukraine he would immediately travel to the Baal HaTanya to discuss with him the situation regarding money for Eretz Yisroel.

Because of this promise, upon Rabbeinu’s return from Israel, when he came to his city and home, he did not get out of the wagon at all but continued on his way to Liozno.

This is also stated in Chaye Moharan – that Rebbe Nachman went to talk to the Baal HaTanya regarding the situation in Eretz Yisroel and there are many stories about this.